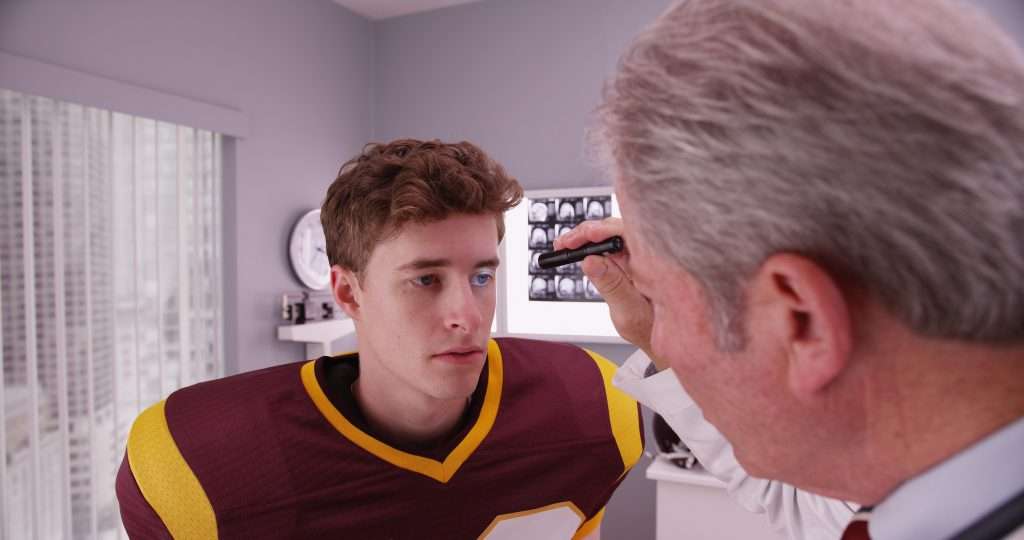 Despite increased media focus and education in recent years, sports concussion myths are still very common. Professional Physical Therapy takes a look as some of these myths and sets the record straight.

Causes of a Concussion

Myth: A concussion only occurs as a result of a direct blow to the head.

Fact: A concussion may be caused by a direct blow to the head, face, neck, or elsewhere on the body if the force of the impact is transmitted to the head.

Myth: It takes a really hard hit to result in a concussion.

Fact: Concussions occur from blows to different parts of the head and of varying magnitude. A relatively minor impact may result in a concussion while a high-magnitude hit to the head may not. There is therefore no way to know for certain whether a particular blow will lead to a concussion.

Myth: Concussions only occur as a result of a straight-on hit.

Fact: Concussions are caused by two types of forces: linear (a straight-on force) and rotational (a twisting motion). On virtually every hit to the head, both linear and rotational accelerations are present.  Experts believe that, of the two, rotational forces are more dangerous because they cause a rapid “spinning” of the brain.

Signs You Have a Concussion

Myth: A concussion occurs only when an athlete experiences a loss of consciousness (LOC).

Myth: A player who gets “dinged” or has his “bell rung” (e.g. suffers a hit which results in a stunned confusion state that clears up within minutes) hasn’t suffered a concussion.

Fact: This is one of the biggest concussion myths. There is no acceptable amount of head contact young athletes can receive without potentially causing a serious brain injury. The fact is that a stunned confusion state is still considered a concussion even though the symptoms may only seem to last for a very short time. Because the signs and symptoms of concussion may not be apparent until several minutes or hours later, with delayed onset of symptoms more common in athletes under age 18, it is essential that a player who has gets dinged be re-evaluated frequently to check to see if a more serious injury has occurred, especially during the first three hours, with a follow-up clinical evaluation and symptom checklist performed at 24 hours post-injury.

Myth: The signs and symptoms of concussion are always apparent immediately after injury.

Fact: While signs of concussion (those characteristics that can be observed by people other than the athlete) and symptoms (experienced by the athlete him or herself) are often present or observable at the time of injury, they may not appear until several hours or even days or weeks later. In fact, delayed onset of signs and symptoms is more likely in younger athletes. Athletes, parents and other caregivers need to be alert to the occurrence of such delayed signs or symptoms or deteriorating mental status, which may signal the presence of a serious, life-threatening brain injury such as subdural hematomas (bleeding on the brain).

Myth: Most athletes know when they have suffered a concussion and report them to their coach, athletic trainer or team doctor.

Fact: Many athletes do not understand precisely when they have suffered a concussion (many still think that it requires a loss of consciousness), and wouldn’t tell the coach even if they knew they had sustained one. The macho culture of sports, particularly in such aggressive contact and collision sports as football, hockey, and boys lacrosse, puts athletes under significant pressure to “shake off” a concussion or “take it like a man” – pressure that coaches and parents often exacerbate, either directly or indirectly or subtly, in their desire for team and individual success – which results in a drastic and chronic underreporting of concussions and can lead to serious harm.

Athletes need to understand the signs and symptoms of a concussion as well as the range of negative consequences of not reporting a concussion, from predisposition to future concussions to long-term cognitive (e.g. memory) and emotional difficulties (e.g. depression), to development of a neurodegenerative condition called chronic traumatic encephalopathy (CTE) that mimics early Alzheimer’s, to catastrophic injury (e.g. second impact syndrome).

When to Return to Play

Myth: It is safe for a player to return to the same game or practice if he suffers only a brief loss of consciousness.

Fact: A player who suffers ANY signs or symptoms of concussion should NOT – and indeed, under the laws of almost all states, MUST not – be allowed to return to the current game or practice no matter how quickly symptoms may clear. By law in all 50 states and the District of Columbia, high school athletes (and, in some states and municipalities, athletes in middle and elementary school and playing for private sports organizations which use public facilities) are now prohibited from same day return to play if a concussion is suspected, with no return to play without written clearance from a medical professional with specialized knowledge of and expertise in concussion evaluation and management.

Myth: It is safe for a player to return to the same game or practice if, after suffering a concussion, he is symptom free within 15 or 20 minutes, both at rest and with exertion.

Fact: A player under age 18 who suffers ANY signs or symptoms of concussion should NOT be allowed to return to the current game or practice no matter how quickly symptoms may clear.

How to Treat a Concussion

Myth: Parents with a child whose concussion symptoms last for more than a week should continue to wake them up throughout the night to check on them.

Fact:  Once a professional has diagnosed a child with a concussion and determined that there is no further risk of a more serious brain injury, parents should let their child sleep.  In fact, they should be encouraged to sleep very early on because it helps the brain heal faster. Waking a child up throughout the night more than a week after concussion does more harm than good.

Myth: After a diagnosed concussion, parents should make sure their child refrains from any physical activity.

Fact: While children should avoid activities that put them at risk for further injury, they should not be completely sedentary, especially a week after injury. Gentle aerobic exercise like walking the dog, easy hiking or riding a stationary bicycle is actually good for them, as staying active helps improve their mood, takes their mind off their symptoms, and restores a sense of normalcy.

Myth: If a child’s concussion symptoms persist for more than a week, parents should take away a child or teen’s electronic devices, including cell phones.

Fact:  Children in general, and teenagers in particular, are most comfortable when they socialize. Social isolation can lead to problems such as depression, anxiety, and changes in appetite. It is important to ease them back into their social circles quickly.  A recent study found that a group of children with concussions who were prescribed complete rest, avoid screen time, and to only report their symptoms, actually reported more symptoms than a group told to rest for a few days and then back into a normal schedule.

How to Prevent a Concussion

Fact: There is no good clinical evidence that mouth guards prevent concussion. A properly fitted mouth guard, regardless of type (boil-and-bite or custom-made), should nevertheless be worn because of its value in protecting the teeth and preventing fractures and avulsions that could require many years of expensive dental care.

Myth: All football helmets reduce the risk of concussion.

Fact: While helmets have been shown to protect against skull fracture, severe traumatic brain injury, and death, and while biomechanical studies have shown that the use of head gear and helmets can reduce impact forces to the brain and provide more protection against some of the forces that may lead to concussion, there is very little evidence that a particular brand of helmet reduces the incidence of concussion.

Fact: According to a new study, the risk of sustaining a concussion in high school football is not affected by the brand or age of the helmet (as long as it has been properly maintained and reconditioned) or by the type of mouth guard worn.

Fact: While football has the highest number of concussions, and concussions are common in hockey, lacrosse and wrestling, concussions also occur frequently in boys’ and girls’ soccer and basketball, and cheerleading.

Myth: All concussions are essentially the same.

Fact: No two concussions are identical. The symptoms can be very different, depending on a variety of factors, including the degree of force and location of the impact, the degree of metabolic dysfunction, the tissue damage and recovery time, the number of previous concussions sustained by the athlete, and the time between injuries. They do, however, share certain characteristics.

Fact: Concussions in athletes under age 18 should be managed more conservatively than concussions in college-age and professional athletes, even if the same medical resources are available, and an elite athlete is the patient. It also appropriate to extend the amount of time after the concussion symptoms of an child or adolescent athlete clear before he is allowed to begin practicing and returns to play.

Fact: Recent studies establish that not only can concussions lead to post-concussion syndrome and increased risk of long-term cognitive, emotional, and behavioral problems, and have been linked by some experts to chronic traumatic encephalopathy, but emerging research suggests that repeated sub concussive blows may lead to the same problems.

If you, family member or friend is experiencing a head injury, contact Professional Physical Therapy for an assessment and/or physical therapy evaluation, so you can get your life healthier and more comfortable today!