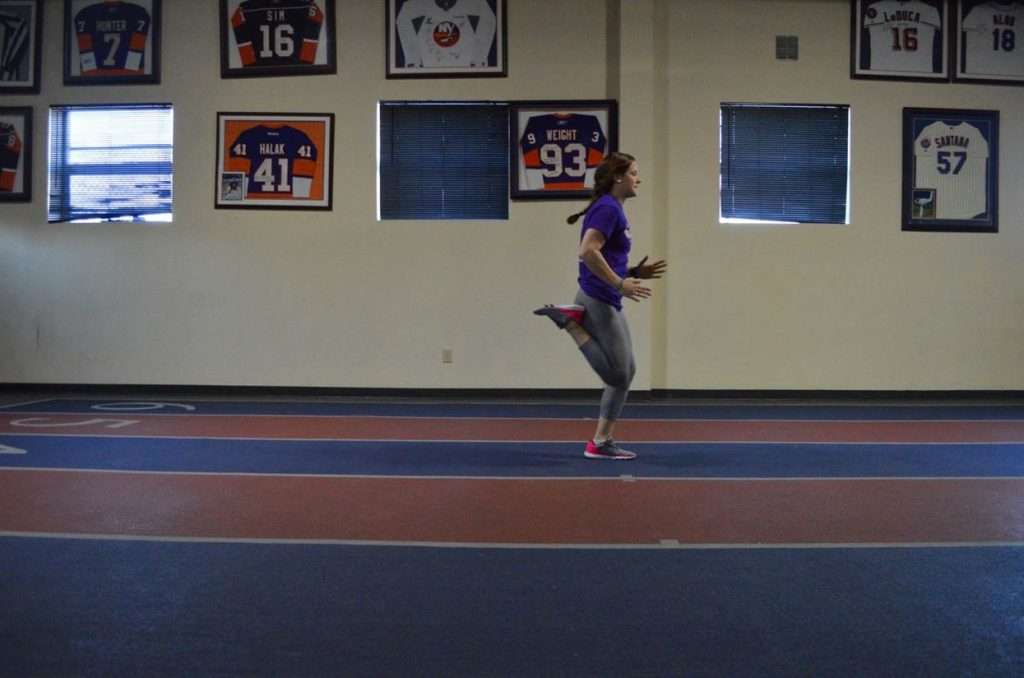 During the rehabilitation of the post-operative anterior cruciate ligament (ACL) knee pathology patient, common interventions utilized in the field of Sports Physical Therapy include, but are not limited to, the use of modalities for pain, edema, enhancing strength and other physical quality levels as well as neuromuscular control. Normal gait is eventually restored as well as joint mobility, soft tissue compliance, and joint range of motion. Structured evidence based treatment progressions are incorporated to ensure an eventual optimal return to play (RTP) realization in running, jumping, deceleration and change of direction athletic endeavors as well as skill tasks.  All of these milestones are achieved through proficient clinical knowledge and clinical skill practices.

Additional clinical techniques and exercises may also be incorporated in the athlete’s rehabilitation program to better prepare the post-op ACL knee athlete for their eventual off-season performance enhancement training program or their return to in-season training and athletic participation. The techniques described in this dialog are for introduction and adaptation in the clinical rehabilitation setting based on my experiences as a Professional team and Division I Collegiate Head Strength and Conditioning (S&C) Coach. By instrumenting these S&C techniques during the rehabilitation process, empirically I have experienced (a) the athlete is better prepared to return to their sport of participation or off-season training program, and (b) upon the athlete’s return to play or training an ideal foundation for sprinting/running mechanics has been achieved via a strategized component of the rehabilitation process. Therefore, more time may now be utilized for the advancement of the athlete’s physical qualities and continued sprinting/running proficiency during the training process.

The concept of restoring the active knee range of motion (AROM) of the post-op ACL athletic knee during the rehabilitation process was instilled upon me over 30 years ago by my good friend Dr. Donald Chu. AROM of the knee is imperative to achieve appropriate running backside mechanics via the proper positioning of the foot at the level of the gluteal fold during the swing phase of the running gait cycle. The swing phase comprises 30% of the running cycle, 60% when including the double float phase, a period where neither foot is in contact with the ground surface area (figure 1). Thereby with such a significant portion of the running cycle void of foot contact, it is very important to have proper back side running mechanics to ensure optimal running performance.

Most post-op ACL knee patients achieve full passive knee range of motion (PROM) during their course of their rehabilitation. This PROM achievement is important as the soft tissue compliance at the knee (hip and ankle) must be re-established to ensure the proper active positioning of the heel of the foot at the gluteal fold of the buttock during the backside mechanics of the running gait cycle. This foot position is only accomplished via AROM efforts, as well as reactive ground forces, and not due to passive joint motion (Figure 2).

Why is this active foot position important during the running gait cycle?

It has previously been stated how the sprinting/running gait is a “cycle” and thus if one part of the cycle is inefficient (i.e. the swing phase) the total cycle will become inefficient i.e. (the stance phase) as well. During the running cycle, if the post-op ACL limb demonstrate poor running mechanic abilities, that will have a direct consequential effect upon the running abilities of the non-op extremity as well. One common coaching cue utilized to ensure the efficiency of the athlete’s backside mechanics transition to front side mechanics is having the athlete “step over the knee” as the swing leg moves forward to progress to the foot strike and stance phase of the running cycle. The proper positioning of the foot at the buttock will assist to ensure that proper backside mechanics will occur resulting in the eventual appropriate application of force into the ground surface area during the sprinting/running cycle.

Failing to establish a proper backside foot position (increased distance) due to the lack of knee AROM creates a greater lever arm (distance from) the gluteal fold as well as establishes a condition that makes it extremely difficult for the athlete to “step over” the knee (Figure 2). 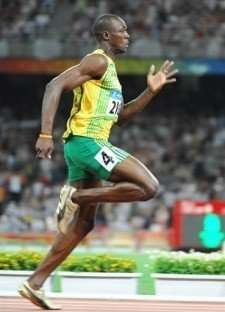 Therefore, this increased foot position distance will create inefficiency during the swing phase as the foot will now likely pass forward below the level of the knee (figure 3), likely resulting in greater friction and braking at the time of ground contact. In conversations with various track and field sprint coaches, the combination of inefficient backside running mechanics resulting in an inefficacy of the total running cycle likely results in a one hundredth of a second increase in time for each running stride that occurs. How does this affect the athlete’s running performance? If a 40 yard dash is completed in approximately 15 strides, an inefficient running cycle due to a lack of knee AROM, will likely result in an increased time of .01 seconds per stride:

How is AROM of the knee achieved during the rehabilitation process?

AROM of the knee should be initiated in the early stages of rehabilitation and progressed throughout the rehabilitation process until proper sprinting/running mechanics is achieve for optimal performance.

The intermediate stages of rehabilitation – As the athlete progresses with their rehabilitation modified Mach drills may be incorporated, when appropriate, into the athlete’s rehabilitation program. Mach drills are track and field drills established by track and field coach Gerard Mach that include the “A”, “B” and “C” series. We place our athlete’s rehabilitation emphasis upon the “A” series and have also established a modified “A” series. “A” marches may be initially instituted as part of the progressions to achieve a proper lower extremity and foot posture that is similar to that of the running cycle (Figure 5). 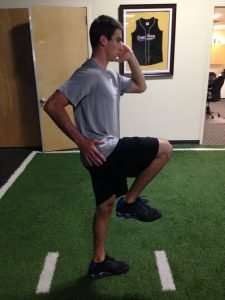 “A” march drills also re-establish the proper thigh/knee height for the optimal application of force into the ground surface area. During the athlete’s rehabilitation the hip flexors may be strengthened with the application of applied weight intensity during exercise performance. Although this will increase the muscle group’s strength, frequently the focus of the exercise performance is placed upon how much weight the athlete can lift and not the appropriate height of the thigh as well as the knee and foot position during hip flexor exercise performance. Proper hip height and knee and foot position provide an efficient range of motion (ROM) for optimal backside mechanics, as well as establish the hip extension required for the application of ground surface force production. This is analogous to the baseball pitcher who achieves a greater shoulder external rotation (ER) ROM thus establishes a greater shoulder arc of motion to result in an enhanced acceleration phase and increased ball velocity.

As the athlete progresses appropriately in their rehabilitation and exercise progression, low impact butt kicks may now be performed at low exercise volumes. The athlete stands in an erect posture with both hands placed against a wall. During the exercise execution both knees are pointing to the ground surface area by alternately flexing each knee quickly while attempt to make contact with the heel of each foot at the gluteal fold (Figure 6A).

Figure 6A Alternating Leg Butt Kicks and 6B Wall Drills

Wall drills (figure 6B) may also be incorporated at this time as these exercises may be initially performed slowly in a “marching” fashion to avoid high ground impact forces. Butt kicks and wall drills may be appropriately advanced to be performed with alternating lower extremity execution performed at higher velocities resulting in higher ground reaction forces. Caution is advised with regard to the prescribed volume of exercise performance as the accumulation of ground reaction forces (stress) due to overprescribed exercise performance can result in an overuse type injury and be detrimental to the lower extremity and athlete performance.

During the conclusion of this phase of rehabilitation “A” marches may also then be progressed to Mach drill “A” skips. “A” skips are performed with an actual skipping as the exercise extremity is progressed from “low” A skips i.e. limiting the thigh to a 45 degree angle to the ground surface area, to progress to an eventual thigh height of 90 degree with accompanied proper knee and foot position. “A” skips are performed initially at 45 degrees to emphasize low ground impact performed over short distances. As the athlete acclimates to the exercise performance, thigh height is advanced to 90 degrees resulting in a greater active knee ROM and soft tissue compliance, enhanced limb velocity, and higher ground reaction forces. 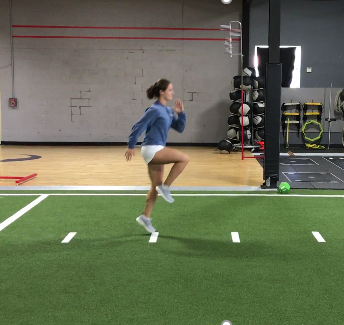 The advanced stage of rehabilitation – As the rehabilitation prescription progresses, “A” skips may be replaced with “A” runs. “A” runs are the last exercise instituted prior to the athlete’s initiation to actual sprinting/running. “A” runs are performed with the athlete performing the “A” skip at a higher velocity with a repetitive cyclical (piston type) bi-lateral running motion “A” runs still require the athlete to maintain heel/foot contact at or close to the buttock while mimicking a modified running technique. The rehabilitation professional should be aware that limb velocity, ground contact volume, and impact forces will increase due to the enhanced speed of this exercise performance. “A” runs should initially be prescribed for short distances (i.e. 10 yards increments) for evaluation and safely, and progressed appropriately. Once demonstrating a successfully program of “A” runs, the athlete may now progress to actual sprinting/running.

Restoring AROM of the ACL knee for is critical for proper foot positioning for optimal backside running mechanics resulting in an overall appropriate running cycle. Achieving this active foot placement will better prepare the athlete for the initiation of running type activities, one of the most important milestones of both rehabilitation and return to play athletic performance.

If you’re experiencing any pain or discomfort during or after exercise, be sure to contact a Physical Therapist for a consultation. To schedule an appointment with a Professional physical therapist, visit us at https://www.professionalpt.com/physical-therapy-clinics/.

Get topical PT news and information straight to your inbox, to help you feel better and get back to the activities you love!